To start the journey, one needs a foundation to start.  I assume everyone knows what a hypervisor is, but if you don’t check out Wikipedia.

VMware has been the leader for a number of years, along with another vendor and open source, like Xen and KVM. Microsoft also has a hand in Virtualization early on in the with Virtual Server, which was originally developed by Connectix, but no real traction and frankly it sucked..

For years, it had a bad rap compared to is competition until Hyper-V was introduced with Windows 2008.  Like any other product, it had it humble beginnings but started to become a real threat.  With the introduction of Windows 2012 and SMB 3.0, In my opinion, Hyper-V is as good, if not better than VMware’s ESXi. At this point, it is a numbers and education play.

Hyper-V Overview (from Wikipedia with edits from me) 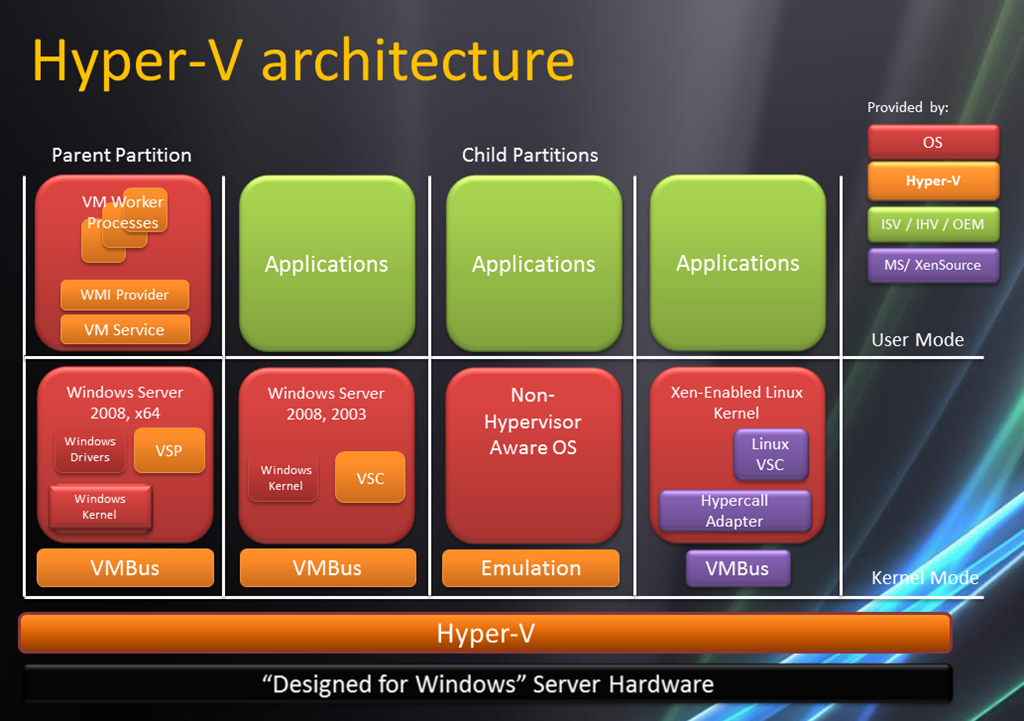 Hyper-V implements isolation of virtual machines in terms of a partition. A partition is a logical unit of isolation, supported by the hypervisor, in which each guest operating system executes. A hypervisor instance has to have at least one parent partition, running a supported version of Windows Server (2008, 2008 R2, 2012 or 2012 R2).

A child partition does not have access to the physical processor, nor does it handle its real interrupts. Instead, it has a virtual view of the processor and runs in Guest Virtual Address, which, depending on the configuration of the hypervisor, might not necessarily be the entire virtual address space.

Depending on VM configuration, Hyper-V may expose only a subset of the processors to each partition. The hypervisor handles the interrupts to the processor and redirects them to the respective partition using a logical Synthetic Interrupt Controller (SynIC). Hyper-V can hardware accelerate the address translation of Guest Virtual Address-spaces by using second level address translation provided by the CPU, referred to as EPT on Intel and RVI (formerly NPT) on AMD.

Also, check out the below poster, this highlights all the current features of Hyper-V
Windows_Server_2012_Hyper-V_Architecture

Having done that (which requires a reboot) you get the hyper-V manager when you expand the role and then connect to you server and you are ready to create or import virtual machines (VMs).

This is not the only way to run Hyper-V, there is free version of Hyper-v called Hyper-V server which you can download here. This is based on server core, an install time option in Windows Server (2008 & later) that is the bare minimum operating system with no real graphical interface, and is either managed from the command line (e.g. with PowerShell, DOS, netsh, diskpart etc.)or remotely. Hyper-V server is even more cut down, it has all of the roles and features removed except Hyper-V and so you need be pretty good at command line stuff or know who to connect and set up the remote administration tools for Windows.

So having got a Hyper-V environment setup, you can then use the create new virtual machine wizard in the virtual machine manager to create new virtual machines. This process is similar to the way you would specify your requirements for a physical server except that you are telling the wizard which resources you are using on the physical server the VM will run on. You can also import a VM from an export created on a another Hyper-V environment or complete the wizard but use a VHD that you have got from somewhere e.g. there are some on Microsoft to save you having to install and configure a Microsoft application in order to evaluate it.

If you are creating a new virtual machine, then the virtual hard disk will be empty and will need an operating system. Theoretically, This can be anything that runs on x86 x64 hardware form DOS 3.3 to Windows 8, or even other OS’s like Unix, and Linux. However, Microsoft will only support it’s operating systems and applications that are supported to run on physical hardware e.g. Windows 7 and not Windows 95 which is out of support.

The word support here means you can get support from Microsoft and not a vague statement along the lines of “we got it to work but you’re on your own if you get stuck”. When it comes to Linux the latest versions of Red Hat SUSE and Centos are also supported because those distros have been made the subject of support arrangements between those Linux vendors and Microsoft so you can get support from Microsoft for them.

Take a test drive and see for yourself…